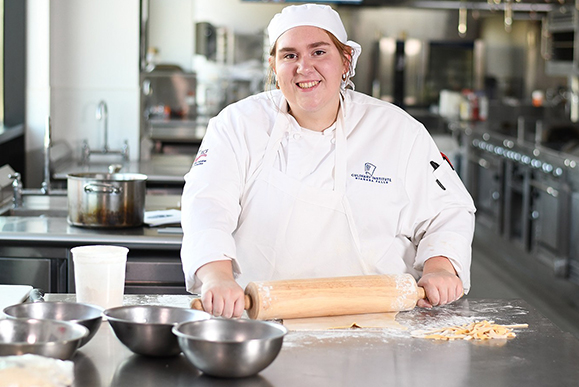 Tayllor Clark is a 2020 graduate of  Niagara County Community College. She studied Culinary Arts, with aspirations to become a Chef Educator. Tayllor was an extremely involved student on campus; she served as Student Government Association President, President of the NFCI Student Club, and the Treasurer of the National Society for Leadership and Success. Tayllor was also a student ambassador, a member of Phi Theta Kappa, the Campus Activities Board, a student representative on the College Association Board and Alumni Association, and Tayllor sat on numerous committees, such as Strategic Planning Committee and Student Government Association Finance Committee. Tayllor is forever grateful for her time here at NCCC and she has loved every second that she has spent getting to know her Thunderwolf family!

Every single one of my professors was still involved in the audio/production industry in one way or another. It was great learning from instructors that were so knowledgeable and had up-to-date information. I picked Niagara County Community College (NCCC) almost solely because of Joe Schmidt. Joe met with me over the summer, gave me a tour of the facility, explained what the program was about, what the expectations were, and convinced me that even though I was starting from the bottom I could make it if I worked hard. I applied to the NCCC that same day. I started my audio career working at Mr. Goodbar and Buffalo Ironworks as an engineer, and as an audio engineer for Ripe Audio almost immediately after graduation. I ended up being the head audio engineer at Nietzsche’s on Allen Street in Buffalo starting in the summer of 2018, and in the fall of 2019, I took a full-time position as an audio engineer for the Seneca Gaming Corporation working out of Seneca Niagara, Seneca Buffalo Creek, and Seneca Allegany Casinos. The program takes students through a progression of classes that establish a strong foundation. You are given help with preparing a portfolio if your plan is to transfer to a four-year school, but also encouraged to find out what you enjoy doing creatively. You learn to appreciate and expand your creativity and potential. As you start unlocking your abilities, your world opens and diversifies. The professors here are established and respected professionals who are actively involved in what they teach. Students are coached to discover their unique talents and pushed towards their personal best.

I am currently a registered nurse at Niagara Falls Memorial Medical Center on the cardiac / stroke unit. We recently have converted over to the COVID-19 unit for our hospital. In light of the recent events, our team is working very hard to protect and serve our community. I am a proud graduate of NCCC I am thankful for the training and education I received which now allows me to treat patients during this difficult time. Lorenzo Parnell is an Animal Management major at Niagara County Community College (NCCC). As a non-traditional student, Lorenzo loves the hands-on learning aspect of the program in and out of the classroom. Each semester, students in the program have internship opportunities with institutions like the Buffalo Zoo, Niagara Aquarium, or your local animal shelter. “I’ve always had a love for animals and being in wildlife as well, so when I found out about this program I felt that it was going to be a perfect fit for me.”

Connor Richardson obtained a degree in Welding Technology from Niagara County Community College (NCCC). Having previously attended a four-year college, Connor decided that NCCC’s two-year program is where he wanted to be. Connor’s welding experience started at home where that work turned into a profession he could see himself in for years to come. He chose NCCC because our two-year program offers more opportunities than a basic certificate that you may get at other schools. “It makes it a lot easier to get a job. You’re going to have some experience in places such as blueprint reading and torch cutting that will make you more of an asset to companies that are out there.” My favorite part about the Chemical Dependency Counseling program at Niagara County Community College (NCCC) is the quality of their educators. It is a privilege to be learning from some of the best professionals in the field. For a student living with a handicap, they helped me realize that regardless of ability, I can accomplish anything I set my mind to. I chose NCCC because you can get a solid education without having to travel far. When I graduate, I want to find a job as a counselor, pursue further education and experiences where wherever they may lead.